Journal Club for May 2021: Strong and tough hydrogels with hierarchical architectures

A hydrogel can be viewed as a unique combination of liquid and solid, the liquid side properties endow it with generally good biocompatibility and high porosity for fast diffusion, yet they are shape fixable as a solid material, by applying knowledge of molecular and structural engineering, they can also be made to bear moderate external loads. These unique combinations of physical and chemical properties make them promising materials for a number of applications.

However, fragileness and low durability are major examples of the obstacles that hindered broad application of hydrogels in real life scenarios. It is a long dealt and studied topic over the past decade, and a number of methods have been developed to tackle this issue, such as double-networking, mechanical stretching, etc. Ximin He’s group recently developed a class of strong and tough hydrogels by tailoring hydrogel structure across several hierarchical length-scales via modulation of polymer aggregation. The series of hydrogels were prepared by combining freeze-casting and salting out in sequential steps, which could realize simultaneously high strength, toughness, stretchability and fatigue resistance (Nature), and also tunability of those properties over broad ranges (Advanced Materials).

Standing on the shoulder of Giants

Natural materials offer unique combination of attractive properties that many synthetic materials could not achieve. For example, Wood is light and strong; nacres are hard and resilient; muscles and tendons are soft and tough. These combination of normally contradicting mechanical properties, are often attributed to their hierarchical structures across multiple length scales, in which the basic building blocks are tightly joint together by physical or chemical bonds, and those bundles or clusters are joint together in a more macroscopic architecture. Current bottom-up (e.g. self-assembly) and top-down (e.g. freeze-casting) fabrication methods often have difficulty in effectively tuning material structure across broad length-scales, therefore, it becomes inevitable to combine those methods together to fabricate hierarchically structured hydrogels. 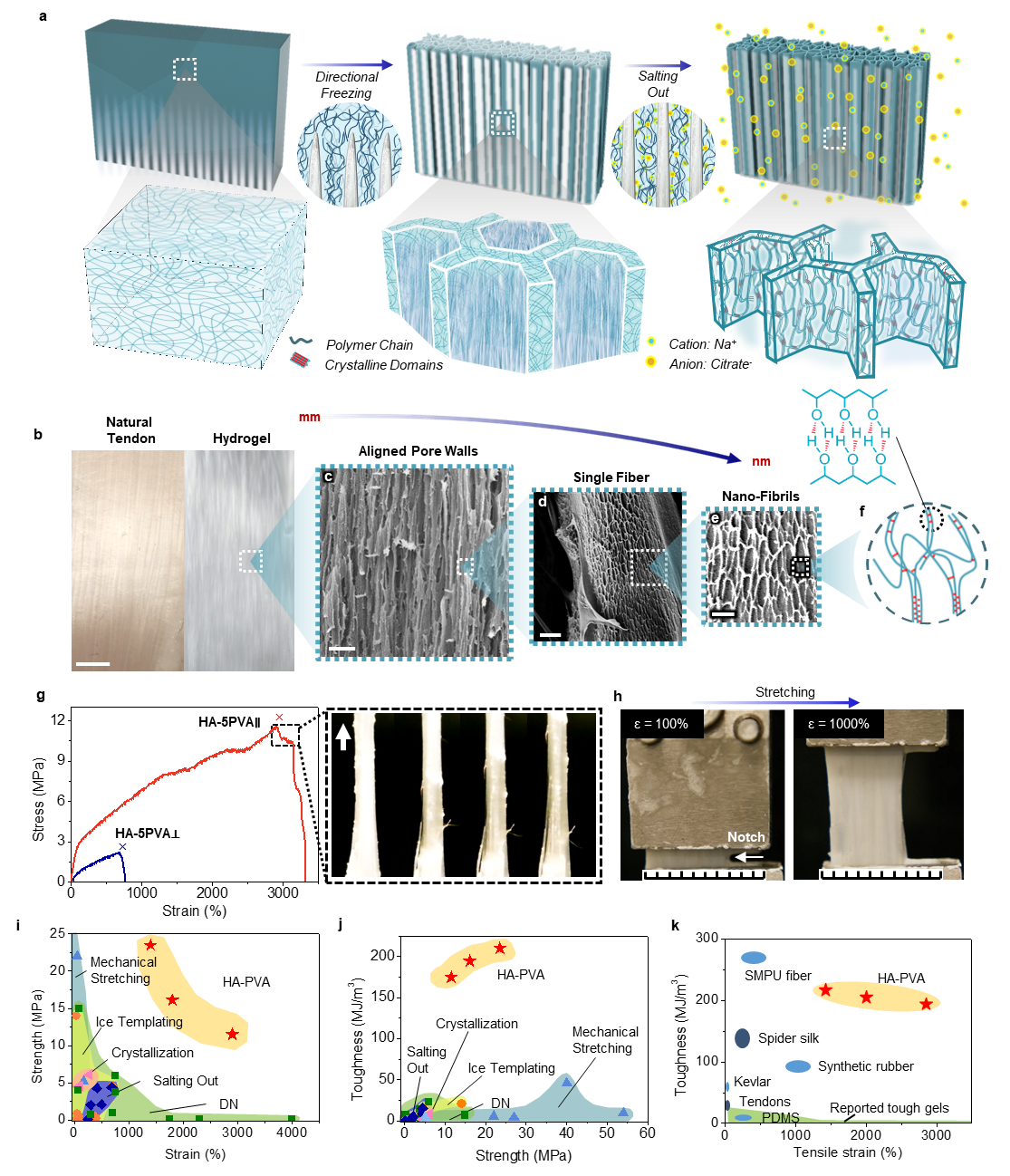 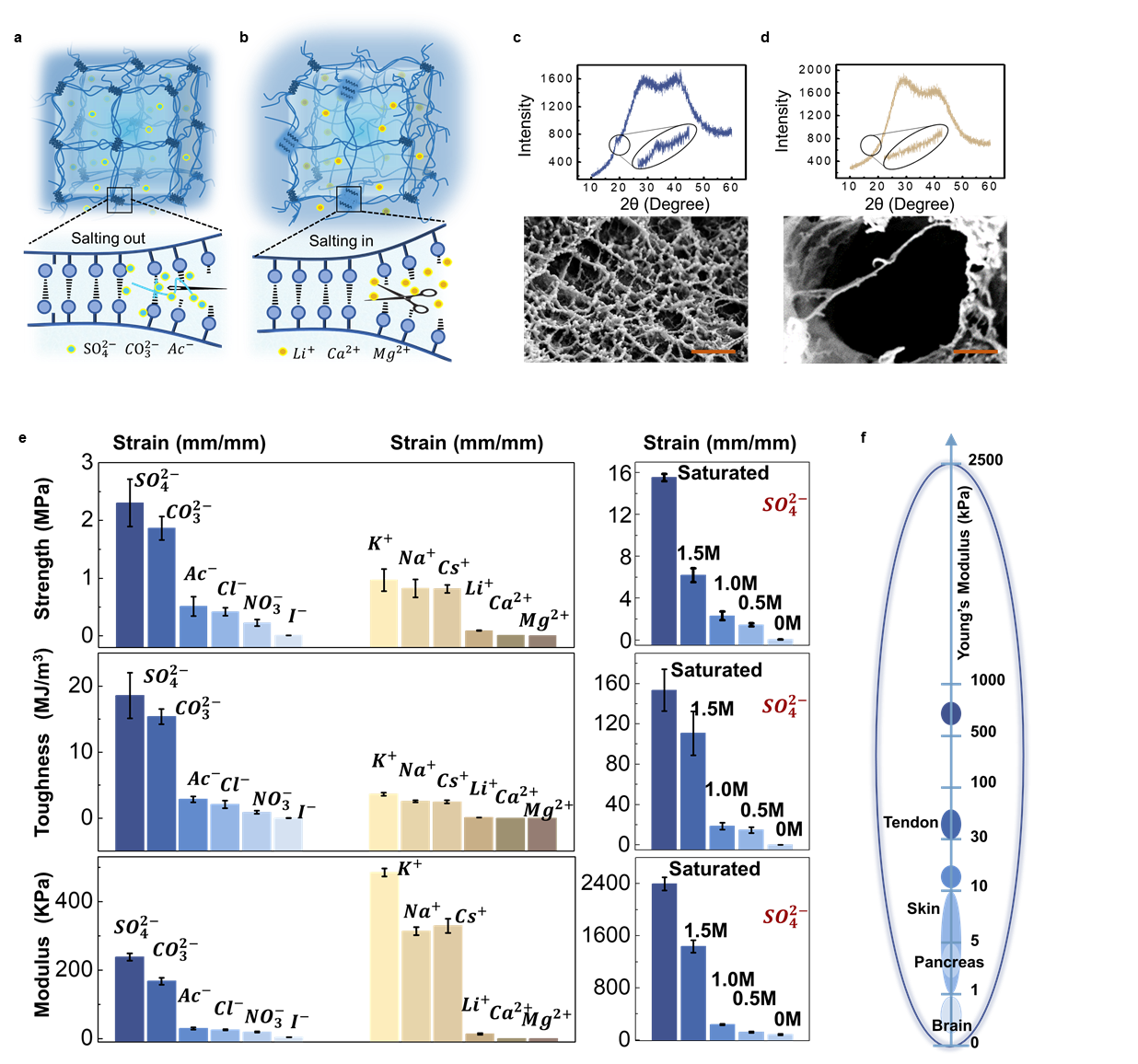 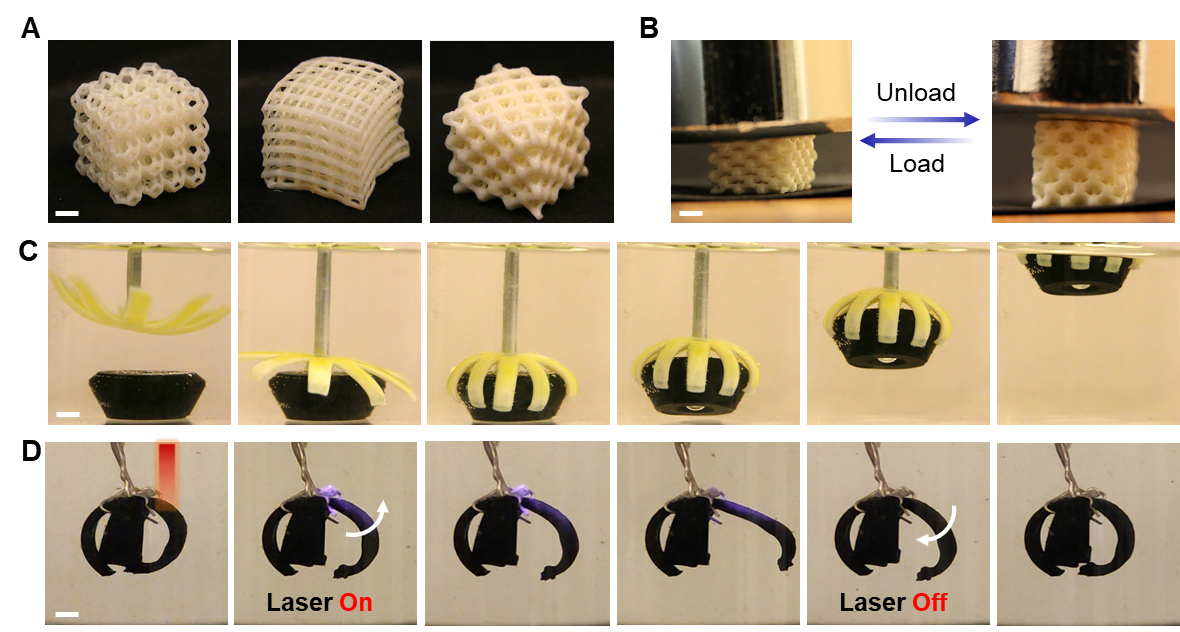 The PVA solution could easily infiltrate into or coat upon various structures, after freezing and salting out in appropriate salt solution, the structure would gain a tough hydrogel coating for reinforcement or protection.

With 3D printing, the hydrogel could be fabricated into biomimetic geometries, the printed structure could then be toughened to desired level by choosing appropriate salt and concentration to achieve the compatible mechanical strength. PVA is bio-compatible and serves as good scaffold for cell seeding.

1. More understanding on the hierarchical structure- property relationship is needed. For example, how many levels are need in the structure to have a prominent effect?

2. More understanding on role of feature at specific length scale is needed. For example, is smaller structures more effective at toughening than larger structures?

3. More understanding of polymer-ion interaction mechanism is needed to explain Hofmeister effect. Currently, all trends are empirical and we do notice differences in effectiveness for different polymers.